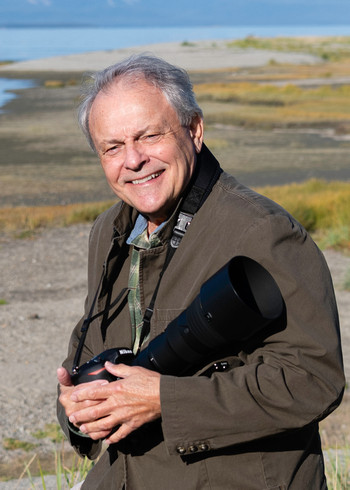 An accomplished nature photographer for over thirty years, Richard travels widely in search of compelling photographic opportunities. His images of wildlife and sweeping landscapes reflect not only his love of the natural world, but also a distinctive vision and style. Several have been exhibited in museums across the country, including the Smithsonian National Museum of Natural History (2017 & 2014); the Oakland Museum of California (2015), commemorating the 100th anniversary of the Panama-Pacific International Exposition in San Francisco; the Alaska State Museum (2012), during its year-long Alaska Positive exhibition, as well as in galleries such as the Juneau Arts & Cultural Center (2015). They also have appeared in Audubon, Alaska Airlines, Outdoor Photographer, National Geographic Traveler, National Wildlife, Nature’s Best, the African Wildlife Foundation’s Wildlife of Africa 2018-2019 Calendar, the Marine Ecology Progress Series, Horzu Wissen (Germany), The Guardian (UK), the Anchorage Daily News and Juneau Empire. In addition, a number are held in private as well as corporate collections. Recent recognitions of his work include: